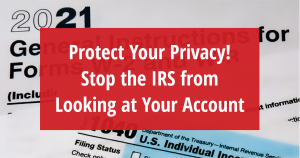 In an effort aimed at increasing taxpayer compliance, the Biden Administration has proposed that financial institutions be required to report additional account holder information in an enhanced annual I.R.S. Form 1099-INT.

Beginning in 2023, the Administration hopes that the IRS will be able to use this information to increase tax compliance and thus raise federal revenues by $463 billion over ten years. The Administration’s Fiscal Year 2022 budget proposes the creation of a new and comprehensive financial account information reporting regime. Banks, credit unions, and other entities would be required to annually report to the IRS the gross inflows and outflows of account holders (businesses and individuals) with a breakdown for cash, transactions with a foreign account, and transfers to and from another account with the same owner.

These requirements would apply to savings, transactional, loan, and investment accounts. A de minimis exception would exempt accounts with gross flow threshold of $600. The vehicle for this reporting will be the existing I.R.S Form 1099-INTs sent by financial institutions, brokerages, and others to account holders who earned more than $10 in interest in a calendar year. In tax year 2019, over 81 million of these forms were delivered or made available to individual account holders.

Outlook over the next few months:

These proposed reporting requirements were expected to be included in the bipartisan infrastructure package in the Senate. However, opposition from Republicans prevented their inclusion.

This new compliance burden on financial institutions was mentioned as a “payfor” for the pending “human infrastructure” reconciliation package being assembled by Congressional leaders. The Ways and Means Committee is continuing its markup during the week of September 13, 2021 for the tax title of the Democratic majority’s $3.5 trillion “human” infrastructure bill. While this new burden was not included in the draft of the Build Back Better Act released by the Ways and Means Committee, it can still be included during the Committee markup, House floor consideration, or in the Senate.

You are about to open a window to a third party website.

WWFCU does not represent either the third party or the user if the two parties enter into a transaction.

Privacy and security policies may differ from those practiced by WWFCU.

Do you wish to continue?

You will be redirected to